Camping Tiveden is located between Swedish largest lakes the Vänern and the Vättern, between Göteborg and Stockholm near the ancient forest area of Tiveden on the shore of lake Unden. 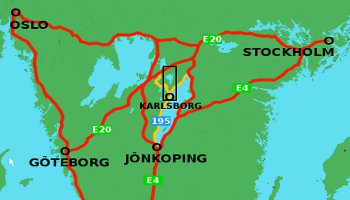 From the north, west and east.

On the E20 between Göteborg and Stockholm are the towns of Mariestad and Örebro. Drive west from Örebro, or east from Mariestad, until you reach the village of Finnerödja. (Finnerödja is usually available in your navigation device, Tived possibly not)

Leave the E20 at Finnerödja toward the south, toward Tived. It would be useful if you take note of your odometer, as exactly 18km (11 miles) down this very road you will find the entrance to our camping at your right hand side.

Follow road signs toward Tived. Tived is a area of several small villages that you will pass. If you encounter the village Sannerud you went about 3km too far.

Coming from the south, for example from Malmö, then you will find on the  E4  the roundabout of Jönköping. From there follow the 195 road toward the north-west and eventually toward Karlsborg. You will find te large lake Vättern toward your right. (Karlsborg is usually available in your navigation device, Tived possibly not)

After Karlsborg you can follow road 202 into Undenäs, or instead follow the  49  a little further into Granvik. With a motorhome or caravan we advise to take the route via Undenäs as the roads will be slightly larger.

At Granvik or Undenäs follow te signs toward Tived. Tived is a area of several small villages that you will pass through. When you pass the village Sannerud our camping is about 3.5km further. You will find the camping on your left hand side.